The green colour provides a note of harmony in the space devoted to China. Jade was the first raw material used as early as the Neolithic era. Its shapes, just like its many shades, are reproduced in bronzes, glazed earthenware and celadon.

The branches of this imaginary tree are adorned with fantastic human creatures, such as the Immortals of the Taoist pantheon, animals as well as representations of sapeque, Han-era coins, which gave the name of "money trees" to this type of objects.

Surmounted by a Bi disc symbolizing the sky, the tree has a mountain-shaped base. It makes the link between heaven and earth, a cosmic meaning confirmed by the orientation of the four branches towards the cardinal points. 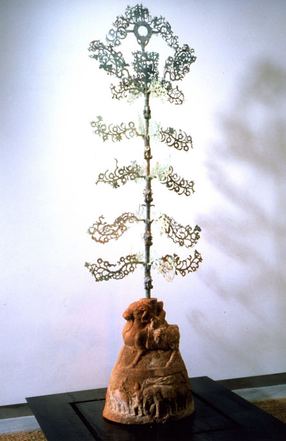 Lady on her knees, Mingqi

In Chinese, funeral statuettes of this type are called mongqi. Representative of the refined and aristocratic society of the Han Dynasty, they include the beings who surrounded the deceased during his lifetime (court ladies, servants, warriors and animals), but also his possessions. This funeral corpus is produced in order to accompany its owner in the afterlife.

Qin Shi Huangdi, the first emperor of the Qin Dynasty (221-206 BC), was the first to gather terracotta representations of his servants in his tomb in a kind of symbolic sacrifice that would replace real sacrifices. In 1974, excavations uncovered an army of more than 7,000 statues in his tomb.

Important Chinese tombs continue to exhibit this type of corpus in less grandiose proportions. These ensembles are vivid testimonies of daily life from the Han Dynasty (206 BC - 220 AD) to the Tang (618-907). The use of mingqi did not decline until the 10th century.

A mythical bird, the phoenix is an important symbol of Taoist philosophy. Guardian of the South, the phoenix, associated with the sun, is considered immortal. It is called "bird of five colors," based on the five virtues of Confucianism that it is supposed to embody: goodness, wisdom, integrity, courage and purity.

This work is a fine hammered bronze plaque that was originally entirely gilded. It was discovered in the grave of a high-ranking woman, probably from the imperial family. This work, made during the Liao Dynasty (916-1125), is exceptional because of its rareness, to this day, it remains unparalleled. 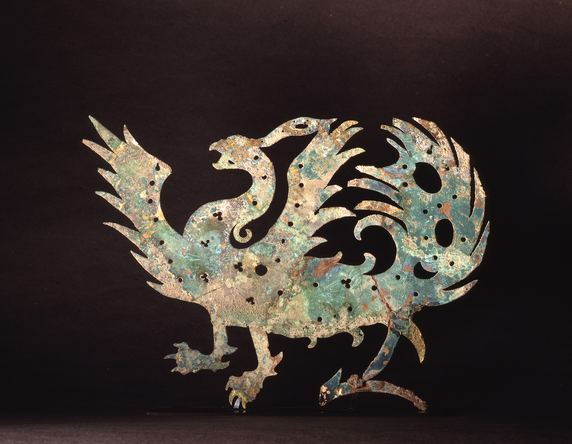